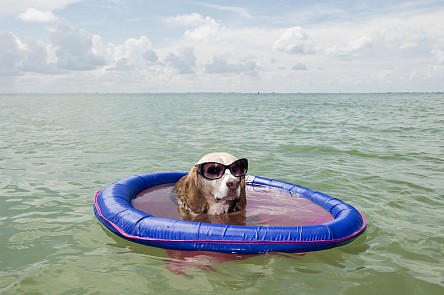 These dog pictures were taken on a Sunday at the dog beach in Fort DeSoto Park in St. Petersburg, Florida. The series is entitled Dog Beach and is part of Tony Mendoza: Cats and Dogs, an exhibition presented by Ohio-based photographer and writer of Cuban descent Tony Mendoza. Carmen, his wife, a Spanish teacher, was attending a one-week Advance Placement Workshop in St. Petersburg. He tagged along, with their dog Bob, a long-haired dachshund who became something of a canine “muse” to the photographer.

Indeed, Bob loves it every time they go on a Florida beach vacation because they only rent houses on beaches where dogs are allowed without a leash. Bob enjoys going in the water, running up and down the beach, and especially terrorizing seabirds. On this particular trip, they rented a house with a pool on a canal, and the pool turned out to be a god-send. They live in Ohio and just before leaving for St. Petersburg Tony Mendoza had wrecked his back, playing tennis. He went to the doctor, and he gave him pain pills, which helped somewhat, but not totally. He could barely stand erect without feeling serious pain.

“What really helped was floating all day on the pool with spaghetti floats,” says Tony Mendoza. “When I floated, I felt no pain, so for the first six days in St. Petersburg, while Carmen was at the workshop, I floated all day long and drank martinis. The water/martini therapy! I was happy, but Bob was miserable. He could smell the ocean nearby, and he wanted to go to the beach. On Sunday, the last day of our stay, I woke up with no pain. We had heard there was a great dog beach (no leash!) at the Fort De Soto Park, so we drove there.”

They were greeted by many very happy dogs and the surreal scene of dozens of dogs on floats. This is the moment Mendoza took out his camera, and spent the day taking pictures. They combine an animal-lovers’ focus on a subjects’ behavior and personality with a photographer’s attention to composition, light, and movement.