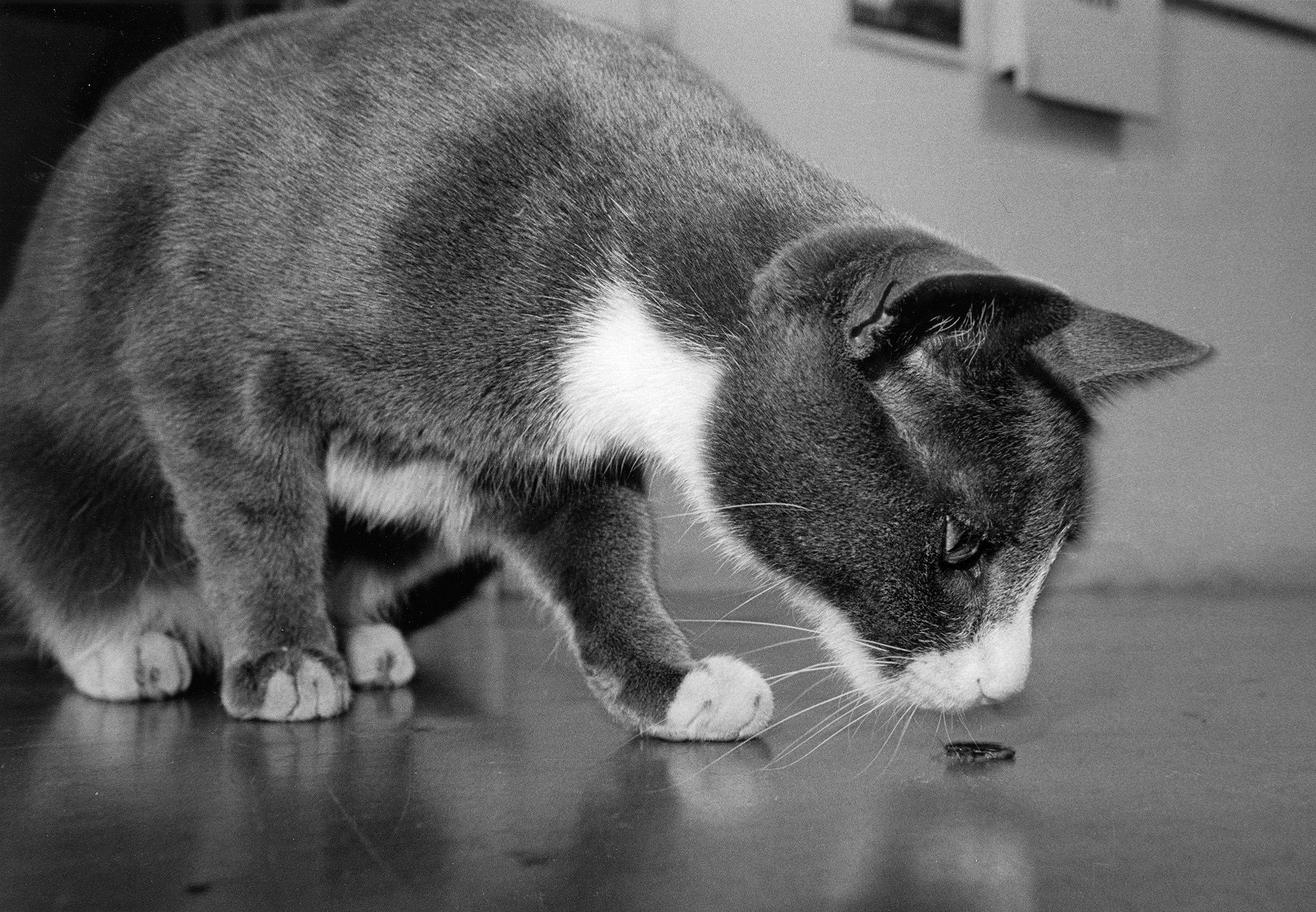 I moved from Boston to Manhattan in 1980. I felt I needed to be there to make it in the art world. I had few connections in New York, and very little money, but I was extremely lucky on my second day there to find an inexpensive loft with a darkroom. I had answered an ad from Nancy, a painter, who wanted to share her loft with another artist. She had a cat. I looked at the cat and thought: that cat is my next photo project. On my last year in Boston I had done a photo project on my girlfriend’s dog, the first portfolio of pictures I felt very good about, all done from the dog’s eye level and focused on the dog in action, doing dog things, as opposed to the dog posing for the camera. I thought, OK. I seem to have a way of photographing animals, so why not photograph Ernie, Nancy’s cat. For the next four years I did just that. I was too broke to go out, so I stayed in the loft and photographed the cat, virtually every day, and took over 10,000 pictures. I had a few Ernie shows, and in 1985 I published Ernie: A Photographer’s Memoir, a photo book with a small California press. I encouraged the publisher to print a lot of books, because everyone who saw the pictures really liked them, and I had come up with an amusing text. The publisher said that they could only afford to print 5,000 copies. What happened next was a minor disaster. A few weeks before Christmas, many major publications reviewed the book, including Vogue, People, Newsweek, and they all loved it. They all suggested that this was the perfect Christmas gift for a cat person. The moment the reviews came out, in a few days, all 5,000 copies sold out, and the book couldn’t be printed again till February of the following year. I counted the circulation of all the magazines that said Ernie would be a great Christmas gift; they added up to over 20 million. I thought: I could have been a contender! Nevertheless, Ernie did get reprinted a bunch of times, sold well over the years, got published in a Japanese version, and in 1999 was republished in an expanded hardcover edition by a large publisher, Chronicle Books.

I learned some lessons from doing Ernie. That a certain level of obsession is almost a requirement to excel at an art project. That if I stayed working at a project long enough, three or four years at a minimum, the project would probably see the light of day. That I could write a little, and marrying photographs with text was something I did well and enjoyed doing. That continual rejections of a project didn’t mean that it was a bad project (Ernie got rejected by over 30 publishers.) Mostly, doing a successful book on my first book project gave me the confidence I needed to stay in the field of photography, and eventually publish five other photo book projects and a novel.

In 1985 I left New York and moved to Miami, married Carmen Areces, a Cuban woman who had always been a cat person, and since then, we’ve always had a cat. Nina, a beautiful white cat who we rescued a few days after we were married lived with us for 20 years, then Max, then Fuji, and now, Che, I’ve never really tried to do another cat photo project focused on any of our cats. Maybe I felt that I didn’t want to repeat myself and become known as a cat photographer. In any case, photographing Ernie was a unique situation at a unique time in my life when I was trying to make it as an artist-photographer in New York. I was overflowing with ambition and energy and somehow I knew that the Ernie project was my passport into that world.