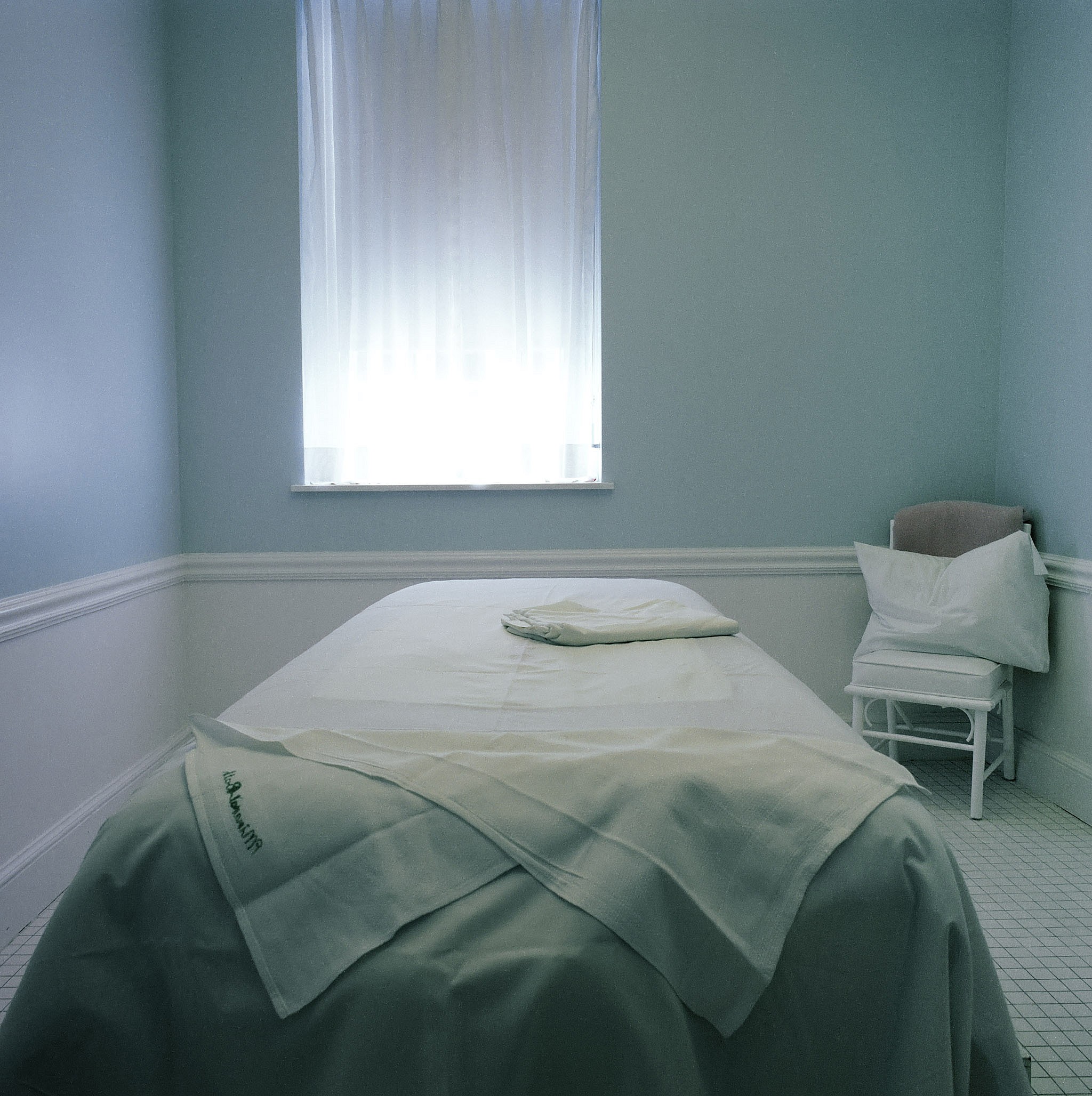 ONLINE ONLY, please call for appointment.

"In the middle of the room there is a huge mechanical construction; shiny containers, pipes, faucets and a set of scales block the view of a flat, table-like surface. Only appliances here, no people. But it is the perspective that seems to draw the viewer into the centre of the image. The place contains familiar objects; on the left, a row of kitchen furniture with cupboards lining the floor and walls, and a sink; on the right, more cupboards, a bin with a swing lid, an upholstered bench and a wooden door. Nevertheless, the place is unfamiliar to us - something stops us from believing in what is in front of us, believing in this kitchen. The title alone, “Morgue Forrest General Hospital” points to the fact that autopsies on dead bodies take place here. So it is a special medical-pathological room, in which the light is cold and even, all surfaces bare.

By contrast, the room containing a spacious bed covered with different fabrics has a friendlier feel to it. The wall is bathed in a warm pale blue, the light falls onto the scene through the white-curtained window. Again, it is the angle of photograph, taken right in front of the bed, that draws the onlooker into this room – a massage parlour. There are no people in this photograph either. But although people are missing, they play a part in these pictures. The depiction of the absent person is an immaterial part of the image.

Corporal Arenas – this is the title Lucinda Devlin chose for her series of photographs. This term is not only a reference to the body missing from the picture, the object of the area so to speak, but also, Corporal Arenas plays with the idea of an imaginary performance; the inspection, the treatment, the submission to the machinery. The integration of these two themes is found in the photographs of the hospital’s own security office; the arenas can be observed from a central point, they are kept under camera surveillance. Corporal Arenas are places in which people are exposed to close observation. It is not hard to imagine what goes on in these rooms crammed with machinery. Bodies are oiled, handled and massaged, hosed down with water. Bodies are examined, probed with x-rays, operated on and subjected to autopsies. We see treatment rooms at health resorts and are given a view into hospital examination and operation rooms, research labs in pathology departments and anatomy labs. Is it true that we would rather avoid these places which we are being drawn into through the lens of a camera? For these rooms remind us of fragility, illness and death.

What Devlin is carrying out here is a de-animation – she is distancing people from this place as she went on to do again in the series “The Omega Suites”. The images of rooms in American prisons reserved for executions are also photographed without any protagonists. A performance, such as the execution of an offender, or the afore-mentioned example of the medical ritual involved in an autopsy, is only played out in our fantasy world. But this is exactly why we are led into Devlin’s pictures in such a vivid and insistent way; we imagine what it could mean to undergo medical treatment or to lie on the operating table. The operations on the body following death are what we find so sinister – a view into pathology, body cosmetics and funeral parlour rooms, which is in no sense a normal part of our visual experience. But here, too, the body is part of a ritual performance.

The (human) emptiness in Devlin’s photography is distinctive, for despite the de-animation of the places she depicts, traces of human beings and the treatment they have undergone there remain. That may sound like metaphysics, but it actually has something to do with the phenomenology of perception. We are involved on two levels with an absent object. When we look at a photograph, we do not usually notice the material object, the photographic paper there before our eyes, but instead see the absent object, the subject of the photograph. Moreover, the description of what is depicted can, in the context of our experiences, lead to new perspectives on these images. Indeed, Devlin’s places are without people, but the emptiness that greets us, instead of hiding something from us, opens our eyes to what is not there. We transfer images of operations, physical examinations, anatomy lessons, images we know from other media-based contexts, onto the Corporal Arenas. And so the image is re-animated. Devlin’s pictures emphasize that the human being is no longer the protagonist in these rooms, but that the body is dominated by medical science and technology, clamped in, lit up, probed and surgically altered. Corporal Arenas tells of the control to which bodies are subjected. Every man and woman in our culture is, after all, encouraged to be examined, cured and nursed when he/she is ill. The various treatments used on the body continue right up until the nails are hammered into the coffin. With her de-animated spaces, Devlin makes reference to both the attachment of people to machinery and the similarity between rooms in which life-prolonging and life-saving procedures take place and rooms in which the dead are examined. The areas differ in their representation; the more urgent the treatment, the colder the place seems. In the showers at health resorts, designed for stimulation by means of a machine, the patient can still stand by themselves. The more horizontal the patient is, the more and more s/he is treated. With its warm material quality, the massage parlour is clearly very different from the harshly lit operating table. In the anatomy lab it is the swiveling lights that dominate and the atmosphere is cold and sterile. Not until the dead body has been cut open, sewn up again and its face cleansed of any traces of death, is it laid out for the last time in a coffin lined with material and cushions…"